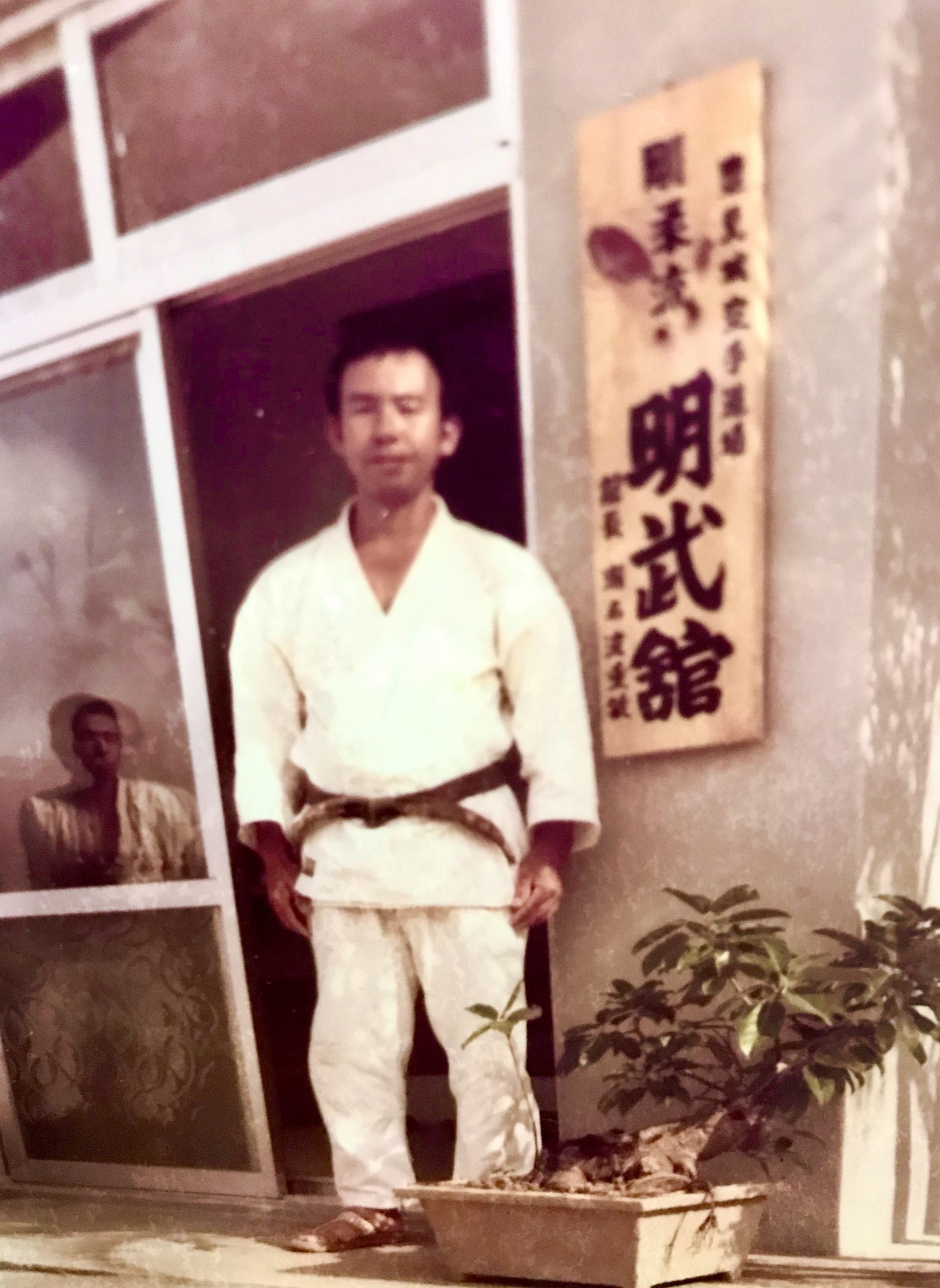 Anyone who has trained seriously in Karate for a number of years, or even decades, will naturally make observations. Personally, I feel that generally there is a difference between Okinawan and Western Karate Ka if physical and technical differences are put to one side. I would say that most Okinawan Karate Ka tend to be more modest and humbler, there by talking their Karate training down, this in comparison to many long standing Westerners who often tend to talk their Karate up. To expand on this a little further I will re live just a few of the many situations whereby I have experienced Karate humility on Okinawa.

The original Dojo wooden plaque or Kanban stood at the entrance of Senaha Sensei’s Dojo in Tomigusuku for around 30 years (As in the photo above alongside a young Senaha Sensei). This being replaced just over 20 years or so ago when Sensei moved away from the Meibukan and formed the Ryusyokai. It wasn’t removed out of sight though, but to the entrance Genkan as Sensei is more than proud of his Dojo history. Anyway, upon departing England last September Senaha Sensei said, “Jones I have a gift for you, when you return to Okinawa you can have my old Dojo Kanban”. I thanked Sensei for his kind offer and then thought no more of it, especially so as it is I who should be gifting Sensei.

Upon returning to Okinawa in December the first evenings training session had concluded, time for a chat and cold drink. When Sensei suddenly called out to Tamaki Sensei to fetch the old Dojo Kanban from the Genkan as I’m giving this to Jones San. At this Senaha Sensei started to wrap it up on the Dojo floor assisted by Tamaki Sensei whilst offering me kind encouraging words in the process. Even though I was deeply honored, I was feeling more than a little uncomfortable at the thought of walking out of the Dojo with 50 years of its history. This being the case, I discreetly went over to Tamaki Sensei to try and explain that I was honored but did not feel worthy of such a gift, saying that this should really go to himself or one of the other longstanding Okinawan seniors. With a pleasing smile and a slap on the back he simply said, “Grin Jones, no you deserve and Sensei happy”. Other members with an equal smile quietly came over to shake my hand. Yes I left the Dojo that evening with a priceless large wooden plaque under my arm and feeling proud, but more than that, I had learned a valuable lesson in Karate humility from the longstanding Dojo members. This being a gift that I will always appreciate and treasure, but more so now for sure.

Time served is often a big issue amongst Western Karate Ka together with being a sign of standing for many, why I’m unsure… The return journey back to my apartment was a long walk from the Dojo, even more so after a really hard training session or if Sensei had filled me full of Okinawan rice wine/Owamori. This being the case I would often catch a lift back off one of the other Dojo members, thus using this time as an opportunity to discuss Karate and learn from them. Here are a couple of lessons learned…

We had just past Yogi Koen when Yogi Sensei joked about the park being named after him. I laughed and asked Sensei if he had ever practiced Karate in there and he replied. “Yes of course many times”. I then asked him how long he had been practicing Karate for? “20 years or so”, he replied. My Japanese isn’t brilliant, but I knew that Ni Ju Nen wasn’t quite the correct answer. Didn’t you give Senaha Sensei the Dojo clock as a gift when he opened his Dojo some 50 years ago I asked. He laughed and said “Oh yes” … He then proceeded to explain that he’d trained for many years, but then had a lay off from the Dojo due to work and then returned to the Dojo for training again. “So I’d say about 20 years”. He insisted! Did you still train in Karate alone during this time Yogi Sensei I asked. “Yes of course”. He replied.  I just wonder how many other Karate Ka would have said 20 years instead of saying 50 years!?

Sachiho San is around 45 years of age and Senaha Sensei’s nephew. Together with being one of the humblest Karate Ka that I’ve ever met. I need to add that he is a phenomenal Goju Ryu Karate Ka in his own right having an ability in Karate that is way above most others for sure. I had been told by Sensei that he’d been teaching Sachiho since he was a young boy but I was unsure how long that he’d actually been training for. So, me being me I asked him the very same question that I did Yogi Sensei. How long have you being practicing Karate for now? “15 years or so“, being his instant reply. Now, I’m no mathematician but I know how long I’ve been visiting Okinawa, plus Sensei had told me that he’d started training when he was very young. So, I proceeded to explain thus. His reply was simple and to the point; “I started training in Karate under Senaha Sensei when I was a young boy. However, I can’t always make it to the Dojo every week due to family and work commitments, so I’d say it works out at around 15 years.” Then he said “Do you understand what I mean”!?  I nodded and thanked him, not though just for his honesty and explaining things to me. But, for giving me a lesson in modesty and humility when it comes to truly studying Okinawan Karate.