The Sensei of Karate 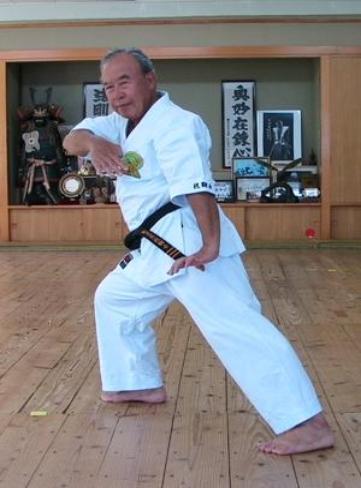 The expression that one is a Karate Sensei is well known by all who practice Karate, unfortunately though this is where the understanding can end, as both the word Sensei, its true meaning and standing is seldom fully understood. Sadly these days the title Sensei is often thrown around cheaply to the point of being abused, I accept that at times this is due to cultural misunderstandings, as this obviously happens more so outside of Japan and Okinawa. At others times I’m afraid this is down
to watered down karate transmission, ignorance, or may be even inflated egos.

If one is to absorb themselves deeply in to the art of Karate then surely they need to attain a true understanding of the Sensei and Student relationship. In fact it is a necessity! A connection that is firstly born through the embryonic process of Dojo initiation as the Sensei will go on to form a close bond with his students that makes the term Sensei of major importance to all serious Karate Ka, so significant in fact that this union of loyalty and respect is unwavering and in many ways irrelevant to others outside of this relationship. I often refer to the close Sensei to Student relationship as one being inside the family, but that’s for another time, it is something you need to have experienced to fully appreciate.

Being a Dan grade or the wearing of a black belt does not make one a Sensei, this is a misconception that is widespread along with the belief that earning a black belt or a base level in Karate, as in a Shodan, allows for the instant accompanying title of Sensei. These days we often see Dojo’s that have six or more black belts who are all referred to as Sensei, or maybe even a newly awarded 8 year old black belt who is called Sensei by lower grade adults, all of which makes little sense. Visiting Japan or Okinawa for training with the idea of stepping in to a Dojo whilst presumably holding either a Dan grade or Sensei status would certainly raise an eye brow or two, or a broad smile at least. In truth you would probably just be corrected by the Dojo seniors in a stern kind of way, in reality though it would show ones lack of understanding or respect on such matters.

“I spent as much time with my Sensei (Azato & Itosu) as possible, and from them I learned not only Karate but a great deal else besides”.

The misuse of Japanese honorific titles is wide spread in the West. To be fully aware of the usage of the word Sensei one needs to firstly examine the meaning behind the Kanji characters that make up the word itself.

先 Sen This means, before, previous, preceding or precedence
生 Sei This means, life or birth

The two characters Sen & Sei together broadly mean “A person or one who is born before”. In Japanese society it is often used when showing respect to someone who has achieved a high level in an art form or holds a position of high social standing, as in doctors, teachers or lawyers. You do though have to watch how literally you take this meaning as the born before is not always as it seems, as is not necessarily used because one is an elder, a Sensei may then of course be younger than oneself. A good way of looking at things is that a Sensei is one who has preceded you and gone there before, thus having vast previous experiences in a way or field of expertise that you also wish to follow or maybe receive some guidance in. They have been there before you, have a deeper understanding, whilst being wiser, knowledgeable and more experienced.

There are then varying questions to be asked upon the usage of the term Sensei. When is one a Sensei? When is one not a Sensei? How does one become a Sensei? What are the requirements of a Sensei? Will all Senior Karate Ka become known as a Sensei? Of course there are varying answers to these questions too. My own Sensei as in Senaha Sensei, mentions that one can not really be a Sensei if they do not have any direct students of their own. He likens this to being a parent, saying that you can not really be a parent if you do not have any children. In the same way that there is a close bond between a child and it’s parent, the child is guided, respects, obeys, and also learns from the life experiences of the parent. In the same way that becoming a parent is a daily learning curve that requires difficult decisions and with time one usually becomes more accustomed and better at, due to experience, being a Sensei in many ways is just the same. The more children one has the more difficult the task is, just like having more students of course.

“After executing a kata, I would await Azato Sensei’s verbal judgement, it was always tense. If he remained dissatisfied with my technique, he would murmur, “Do it again,” or, a little more!” a little more, a little more, so often a little more, until the sweat pored and I was ready to drop: it was his way of telling me that there was still something to be learned, to be mastered. Then, if he found my progress satisfactory, his verdict would be expressed in a single word, “Good!” That one word was his highest praise.

Lastly, If you happen to be lucky enough to be a part of a quality Karate Dojo and have a true Karate Sensei who is one of deep understanding and knowledge. Then please do look after him or her, as in today’s day an age they are so scarce it’s unreal. I would also advise those who are serious about studying Karate to go out of their way and seek out a true Karate Sensei. You make the effort as ot will truly be worth it.